A lymphocyte is a type of white blood cell (WBC) that has a significant function in the body's immune system. Lymphocytes function by properly responding to infectious microorganisms and other foreign invaders in the body. Lymphocytes can work alone, but some of them are also capable of coordinating with other cells.

Approximately 20 to 40 percent of the total number of white blood cells are lymphocytes. They are usually found in the blood and are concentrated in the tonsils, lymph nodes, and spleen, where initial immune responses are likely to take place.

Are dental crown procedures still occurring at this...

Have a question aboutLymphocytes?Ask a doctor now

Usually, lymphocytes only last for a short time, having an average lifespan of seven days to a few months. However, a few lymphocytes are able to survive for years and create a pool of T and B cells. These cells account for the immunological memory or a faster immunologic response to previously encountered antigens.

Lymphocytes are also able to bind antigens through the receptor molecules found on their surfaces. Antigens are foreign microorganisms or substances that the host organism recognizes as non-self. Every lymphocyte has receptors that bind to specific antigens.

T cells mature in the thymus but originate from the bone marrow. There are different types of T cells, and they include:

The body's immune response can be activated or controlled with the help of helper T cells. These cells help secrete cytokines, activate cytotoxic T cells, and support the maturation of B cells. However, helper T cells only work when they are activated on the surface of antigen-presenting cells (APCs).

Helper T cells are also categorized into groups according to their:

Although regulatory T cells can suppress immunity for tumors and certain pathogens, they also limit inflammatory conditions, maintain tolerance, and prevent the development of autoimmune disorders.

B cells mature in the bone marrow and secrete cytokines and antibodies. These cells usually function in the adaptive immune system. B cells work with molecules or antigens that can trigger an immune response to effectively produce antibodies.

These cells circulate throughout the body to quickly initiate an antibody response when an antigen is detected. Memory B cells help the body's immune system to have a faster response when reinfection occurs.

Regulatory B cells help promote regulatory T cell generation. These cells help stop the lymphocytes that cause inflammation. An abnormal recognition of B cells, as well as an abnormal B cell transformation, can cause autoimmune diseases, such as lupus, arthritis, multiple sclerosis, diabetes, and cancer.

NK cells play a role in the innate immune system. NK cells provide a quick response to cells that are infected. Moreover, these cells do not require antibodies to start immune reactions. They also help in fighting secondary infections. NK cells are particularly needed when it comes to fighting cancer since they might show innate resistance to certain viruses such as HIV.

A white blood cell (WBC) count is a simple blood test that can measure the number of WBCs including lymphocytes in the body. Abnormal WBC counts are shown by either a higher or lower number than the normal range for a person's age.

Abnormal results may indicate certain medical conditions or blood disorders. The doctor may consider several factors to determine the exact cause of the abnormal result. These factors include a patient's medical history, symptoms, and specific medications taken.

Other Roles of Lymphocytes

Does myopia get worse without glasses?

More from FindATopDoc on Lymphocytes 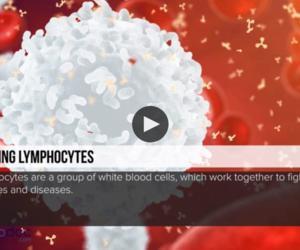 high amount of lymphocytes in the body