1 What is Airplane Ear?

Airplane ear ranges from mild discomfort or severe pain in the ear experienced by airplane travelers.

The discomfort can start as a minor annoyance or create partial hearing loss during and after ascent or descent of plane.

Airplane ear is also known as barotrauma, and is caused by the pressure difference between the middle ear and the surrounding air.

Symptoms of airplane ear usually begin immediately after ascent or descent of the plane and may persist for some time.

It often resolves within 15 to 20 minutes. Equalizing the pressure is the best way to control airplane ear and make travel comfortable.

Specific treatment is needed only for severe forms of barotrauma.

The main signs and symptoms of airplane ear are:

In some cases the symptoms may be severe, making air travel very uncomfortable and painful.

The main symptoms of this condition include:

If the condition persists for hours after travel, visiting a doctor is recommended.

Airplane ear is caused by the pressure difference between the middle ear and surrounding air.

Functions of the eustachian tube

Air pressure within the ear is regulated by the eustachian tube, a narrow tube that connects the middle ear with the throat.

Under normal conditions, the eustachian tube replenishes the air within the middle ear and keeps the pressure equal on both sides of the eardrum.

When there is a pressure difference, as in the ascending or descending of a plane, the air trapped within the middle ear drops to a lower pressure.

This may cause the eardrum to be stretched inside, preventing it from vibrating normally. The inward pulling of eardrum causes pain while the abnormal vibration results in muffled hearing.

Swallowing and yawning helps to activate the muscles of eustachian tube that will trigger replenishment of air within the middle ear. This resolves the symptoms of airplane ear.

Making a diagnosis of Airplane Ear is done by Physical examination of the ears using an otoscope, which helps to identify the changes in the eardrum.

Bulging of the eardrum causes pain and partial hearing loss and can also be checked using an otoscope.

In severe cases of airplane ear, the eardrum tears and accumulation of blood behind the ear can occur.

Vertigo is caused by damage to the inner ear. Audiometry is suggested to detect hearing problems.

The sources of issues in the inner ear can be identified by this method.

Thumping sound in my right ear

Is it normal to have pressure built up in your ear?

Treatment of Airplane ear is done by several methods, which include:

In most cases, the symptoms resolve on their own once the pressure is equalized.

Surgery is recommended only if fluid drainage is required.

Some easy ways to prevent the discomfort of Airplane ear during travel are:

Belladona is a homeopathic remedy recommended for controlling airplane ear. The dose is repeated when pain and discomfort persist.

Kali sulph is also suggested to cure the problems in the eustachian tube that cause airplane ear.

Merc-I-F prevents sharp shooting pain in one of the ears during descent.

Keeping decongestants, earplugs, gum, and allergy medications during travel helps one to cope with Airplane ear on a plane ride.

Self-care is the best way to treat airplane ear and it very rarely causes any complications.

If the symptoms are serious, it may lead to middle and inner ear damage.

In some rare cases, airplane ear may lead to hearing loss and a chronic ringing in the ears.

More from FindATopDoc on Ear Disorders 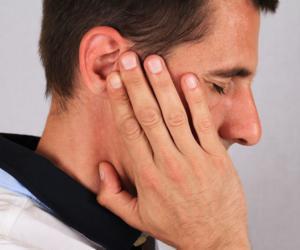 What Is Cauliflower Ear: Causes and Treatments

Is there a way to fill in preauricular pit?

How long does an inflamed eardrum take to heal?

Is there a way to fill in preauricular pit?

What causes fluid to form in one's eardrum?

Is it normal to have pressure built up in your ear?

Thumping sound in my right ear

Crinkling noise in my left ear, what could it be?

Will repeatedly using earplugs put me at risk of an infection?

How long does an inflamed eardrum take to heal?

What's this crackling noise in my ear?

How can I treat frequent ear pains in my 5 year old?