1 What is autoimmune hepatitis?

Autoimmune hepatitis is a serious and a long lasting medical condition which causes the immune system of the body to operate against itself and attack normal cells and components present in the liver. This condition leads to an inflammation in the tissues of the liver and sometimes also results in liver damage.

The immune system as its original function is meant to protect from various infections by identifying the germs and bacteria, and destroying them as a self defense of the body.

Autoimmune hepatitis is a very serious form of illness that could slowly worsen when left untreated for an extended period of time. It could also lead to severe conditions such as cirrhosis or liver function failure. Cirrhosis is a condition which is also known as scarring of the liver. In this condition, the scarred liver tissues replace the healthier tissues in the liver and restrict the blood flow through the liver. When this occurs the liver stops functioning properly.

This is the most common type of the disease. Most people with this disorder have other autoimmune diseases like celiac disease, rheumatoid arthritis, or ulcerative colitis.

This is more commonly seen among children and young adults. This type is also associated with other types of autoimmune diseases.

2 What is an autoimmune disease?

An autoimmune disease is a serious disorder wherein the immune system of the body attacks its own cells and organs through proteins which are known as autoantibodies. This process where the body causes the attack is known as autoimmunity.

In a normal body the function of the immune system of the body is to make several proteins, also known as antibodies, which help in fighting the infections and defending the body from their ill effects.

However, in some people the body ends up making more autoantibodies. How this happens is still unknown. However, there are several environmental factors that could put someone at risk of developing autoimmunity. Environmental factors include all the factors that occur outside the body like the bacteria, viruses, other micro organisms, toxins and various forms of medicines.

Early stages of autoimmune hepatitis may remain asymptomatic, while the symptoms may appear suddenly in the late stages.

Symptoms of autoimmune hepatitis could vary from being mild to severe. When diagnosed in the early stages, one may see no symptoms, but as the condition worsens, the symptoms could suddenly appear.

They could also develop slowly as the time progresses.

The most common symptoms of autoimmune hepatitis include:

In women it may lead to absence of menstruation.

Ascites and mental confusion are more severe symptoms of the condition.

all increase the risk of autoimmune hepatitis.

Women are more likely to have autoimmune hepatitis than men.

all increase risk of autoimmune condition that cause liver damage.

Autoimmune hepatitis is also found to run in families, suggesting a hereditary link.

History of other autoimmune diseases like celiac disease and rheumatoid arthritis also increase the chance of autoimmune hepatitis. 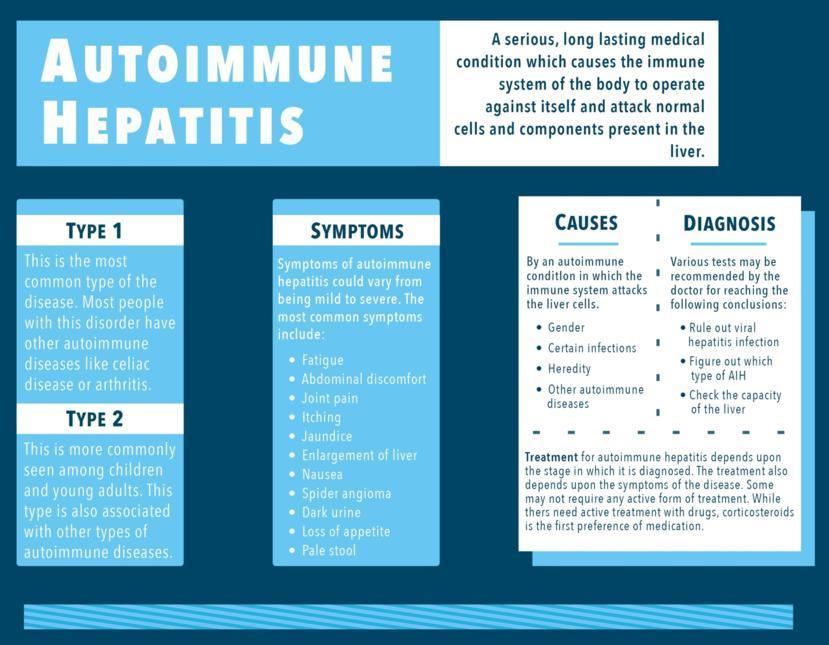 How long are you in hospital after a liver transplant?

Autoimmune hepatitis is very often confused for other illnesses as the symptoms could overlap with those of other diseases. Some symptoms are very similar to those seen in case of viral hepatitis.

For a correct diagnosis, various tests may be recommended by the doctor for reaching the following conclusions:

Autoimmune hepatitis is diagnosed by liver biopsy and blood tests.

Blood tests help to distinguish other conditions like viral hepatitis that have similar symptoms. Blood test assesses the specific antibodies for a condition.

It is also used to identify the type of autoimmune hepatitis.

Liver biopsy is the confirmatory diagnosis for this condition. In liver biopsy a small sample of liver tissue is analyzed in the laboratory to determine the degree of damage.

A liver biopsy is often required to diagnose the disease so that it can help in determining the type of autoimmune hepatitis and to understand the extent to which the liver maybe damaged.

Some of the patients who are suffering from a very mild severity of this disease may not require any active form of treatment. For those who are recommended an active treatment with drugs, corticosteroids is the first preference of medications to start the treatment.

Corticosteroids are not of the same classification as the anabolic steroids that are specifically used to build muscle mass. Corticosteroids like prednisone are used as anti-inflammatory drugs which help in reduction of inflammation in any site on the body including the liver.

The doctor may even suggest other drugs instead of corticosteroids which have a similar anti-inflammatory action like azathioprine, mycophenilate mofetil or methotrexate.  All these drugs are strong in nature and do carry their own share of side effects which should be discussed clearly with the doctor before starting on the treatment.

Around 90% of patients need treatment in some form or the other to maintain their body levels after the steroids perform the initial function of controlling the inflammation of the liver. Around 10% people may not require a follow up treatment and can live a normal life without any recurrence of inflammation in the liver for many years in their life.

Since the intensity of this disease depends upon each individual, there is always a risk of recurrence of the inflammation in the liver in the near future. The relapses are normally controlled by a round of steroids that may be prescribed to the patient for a temporary period.

Treatment strategies of Autoimmune hepatitis focus on controlling the autoimmune condition that lead to liver inflammation and damage.

Medications are used to slow down the activity of the immune system.

Prednisone and azathioprine are used to suppress the immune system activity. Prednisone have long term side effects like

After a period of treatment, it is kept at the lowest possible dose to control the symptoms.

Liver transplant is suggested if the response is less for conventional treatment, or if there is liver cirrhosis.

This part regenerates into new tissues after the transplant in both donor and receiver.

Is liver transplant an option for people suffering from autoimmune hepatitis?

In the long run, a liver transplantation is seen as good option as it increases the survival rate by 10 years.

The risk of a relapse of autoimmune hepatitis is not completely ruled out even after a liver transplant. It mainly occurs in case of patients who are suffering from compromised immune systems.

There is no standard preventive measure for autoimmune hepatitis.

Knowing the risk factors for the condition may help in detecting and treating the disease early.

There is no way to determine the efficiency of alternative therapies in treating autoimmune hepatitis.

Medications, although strong, are known to have a strong effect on delaying the progression of the disease and saving lives.

A few alternative and homeopathic remedies are used for autoimmune hepatitis. They focus on symptom relief.

Natural remedies are used to control inflammation and to prevent the progression of the disease.

A few natural remedies include:

Milk thistle is used to protect liver from damage and to reduce inflammation.

Lifestyle modifications are necessary in order to cope with autoimmune hepatitis.

Corticosteroid medications have many side effects which make treatment of this condition challenging for both healthcare personnel and the patient.

Sharing experiences about the treatment help in understanding and coping with the condition.

Being a part of a support group helps in understanding and sharing information about the disease and the treatment strategies.

Patients suffering from cirrhosis due to autoimmune hepatitis could develop ascites. Normally a diet that is low in salt is required for these individuals.

Patients are also recommended to keep up their intake of proteins due to the catabolic form of this disease and high chances of muscle wasting occurring due to this disease.

Most patients do not require hospitalization; however, it may be required when the condition flares up.

Long term bed rest is required to recuperate from the illness, though the patients begin to feel better soon with some physical activity.

There are several risks and complications associated with autoimmune hepatitis.

Untreated autoimmune hepatitis can lead to:

Other more rare circumstances include:

Autoimmune hepatitis is definitely not a contagious disease. It is not even a disease that is inherited in the family line, even though there could be a tendency towards this disease in some families. Children and grandchildren could have an increased risk of acquiring autoimmune diseases associated with thyroid, liver conditions, or arthritis. It is not definitive that those who have this disease in their family will surely contract it, but the risk is always there.

More from FindATopDoc on Liver Diseases

How is a liver disease diagnosed in children?

What is the recovery time for liver cyst surgery?

Can taking a lot of Tylenol really lead to a liver transplant?

5 Tips on Living with Hepatitis

What tests are used to confirm hepatitis?

How to tell the difference from gallbladder vs liver pain?

What Is Autoimmune Hepatitis?