When a woman becomes pregnant, her periods stop. Pregnancy starts when the egg that has been released from the ovaries is fertilized by a sperm. It usually lasts about 40 weeks and is divided into three trimesters. The first, second and third months are considered the first trimester of pregnancy. Most changes and development happen during the first trimester.

If a woman is ovulating during intercourse, there’s a high chance of conception. During intercourse, millions of sperm travel through the vagina and the strongest sperm will penetrate an egg cell in the fallopian tube. A woman is not yet considered pregnant at the first or second week because conception usually occurs about two weeks after the last menstrual period. The fertilized egg is called a zygote which will travel from the fallopian tube to the uterus. 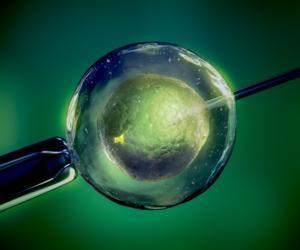 Single Embryo Transfers Are Safer for Having Healthy...

In the beginning, the fertilized egg grows in the womb and will be called an embryo. By the end of 4 weeks, the embryo will look like a tadpole. All major organs and systems begin to form. Most importantly, the heart is beating. At this stage, the placenta has began to form.

At week 5, the embryo is most at risk for damage from things that may cause birth defects such as illegal use of drugs, medicines and alcohol abuse. In addition, infections like rubella and other factors could also cause birth defects.

The baby’s heart continues to grow and beats on a regular rhythm from weeks 6 to 7. Also, the blood pumps through the main vessels and the baby’s brain is forming five different areas.

On week 8, the embryo becomes a fetus. The baby is now an inch long and the organs continue to develop. The head is now larger than the body and the eyes, ears, nose and mouth are more distinct than before. The fingers and toes are webbed and the arms and legs can be distinguished easily. The lungs start to form. By the end of eight weeks, a human shaped is formed. The baby’s heartbeat can now be heard through the use of a Doppler ultrasound.

From 9-12 weeks, fetal movement increases. The larynx begins to form in the trachea, nails begin to appear, the external genitalia are developed and the outer ears start to form shape. At week 10, the baby’s facial features are more distinct.

At 12 weeks, the baby is about three inches long. During this period, the baby’s neck begins to uncurl and the limbs are now complete. The ears are forming while the eyelids are still fused. The baby can now make a fist because the nerves and muscles are working together. During this stage, the external sex organs show if the baby is a boy or a girl but couldn’t be seen clearly through an ultrasound.

By the end of the first trimester, the fetus is fully formed. The fetus may weigh 0.5 to 1 ounce and would be four inches long. The fetal stage will continue until the baby is born.

Although the fetus has fully formed the organs and systems by the end of 12 weeks, the fetus won’t be able to survive alone. The first 12 weeks is the most vulnerable stage for the fetus.

It is very important to not miss your scheduled visits with your physician to be able to carefully monitor the progress and development of your baby.

Excessive Weight Gain During Pregnancy is Linked to...

What do I do when I get a positive pregnancy test?

Can a baby feel it when you rub your belly?

Does breastfeeding help you lose weight?

Is a root canal during pregnancy safe?

How do I take care of myself after a miscarriage?

Can you ovulate 48 hours after LH surge?

What fruits should be eaten during pregnancy?