Use of non-aspirin anti-inflammatory painkillers may increase the risk of miscarriages in women, according to a new study published in the Canadian Medical Association Journal. This new study is large with more than 52,000 pregnant women from Canada. The study results show that women who had prescriptions for any of the non-steroidal anti-inflammatory drugs (NSAIDs) doubled the risk of a miscarriage. NSAIDs include the common medications, like ibuprofen and naproxen. These drugs are commonly used to treat muscle injuries, headaches, and menstrual cramps.

As these drugs are very common, women tend to reach out for these even before they realize that they are pregnant. In the present study, women used NSAIDs for four days during the early stages of pregnancy. Researcher Anick Bérard, PhD, an epidemiologist and professor of pharmacy at the University of Montreal reported that such small amounts was enough to trigger an increase the risk of miscarriage. NSAIDs and many other over-the-counter medications are considered to be safe during pregnancy. The present study shows that these drugs should be used with caution. 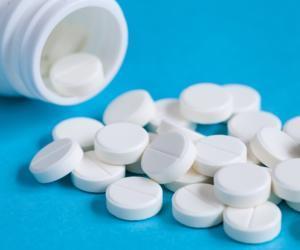 512 Pill Used for the Treatment of Chronic Pain

In the present study, researchers collected details from 4,700 women in Canada who had lost a baby before the 20th week of pregnancy. All the participants were compared to other women of same age who did not have a miscarriage. Analysis shows that 7.5% of the women who had lost a baby had taken one of the NSAIDs during pregnancy. The risk varied from medication to medication.

Bérard remarks that women who take NSAIDs over-the-counter without any prescriptions also have equal risk of miscarriage even though these drugs are at a lower dosage. “One of the major limitations of the study was that researchers considered prescriptions for NSAIDs as an indicator of its usage”, points out Gideon Koren, MD. Koren is a pediatrician, toxicologist, and pharmacologist who directs the Motherisk Program at the Hospital for Sick Children, in Toronto. Many women may take NSAIDs without prescription also. This is significant in Canada as ibuprofen, one of the NSAID is available over-the-counter. Many women, even without a prescription for the pain killer, would have used it.

In one of the studies looking at the safety of migraine medications, researchers interviewed the participants regarding their medicine usage when they found that it has been prescribed by the doctor. They found that many women do not actually take the medications. One of the differences noted by Gideon is with prescriptions of anti-nausea medications, drugs recommended to control morning sickness. Results of the Canadian study showed that 15% of the women who did not have a miscarriage got prescriptions for anti-nausea drugs when compared to 3% of the women who had miscarriage. Gideon Koren finds this result quite strange as morning sickness protects against miscarriages.

Some of the other differences were higher rate of depression, anxiety, and poverty in women who had a miscarriage, when compared to those who did not have a miscarriage. Experts feel that women need not worry even if they have taken NSAIDs during pregnancy. They add that more studies are required before considering this association. Study researchers also say that the study does not show that use of NSAIDs cause miscarriage. As the saying goes ‘prevention is better than cure’ and opting for a safer pain reliever is better during pregnancy. Bérard says that this is particularly true during the first trimester of pregnancy when women can choose acetaminophen instead of the usual pain killers.

Women who have chronic conditions, like rheumatoid arthritis, who rely on NSAID’s to control their joint pain, should plan their pregnancies well in advance to avoid any problems, says Bérard. Pregnant women should avoid self-prescription and talk to the doctor before taking any medications.

Can birth defects occur in the third trimester?

Will my baby get covid-19 since I have it?

More from FindATopDoc on Pain Relievers

Can men have cellulitis?

Can a disease you catch affect your baby while pregnant?

How soon do pregnancy symptoms start?

I think I am in labor?

Is a c-section done under local anesthesia?