Continuous advancements in diagnostic and treatment methods have made breast cancer go from being a death sentence to being something that can be treated effectively for many women. Generally, breast cancer treatment falls into the categories of surgery, chemotherapy, biologic therapies, and radiation.

Within these categories there are numerous different types of treatments, which can make it difficult to understand what is out there and how it may be used to treat breast cancer. The type and combination (if relevant) of treatment that a breast cancer patient may receive depends on many factors including but not limited to the stage of the breast cancer, the location, what other treatments have been used in the past. 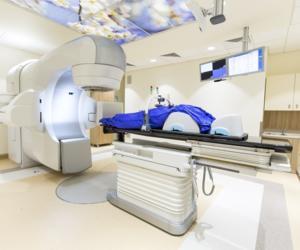 For women who may be undergoing radiation, this can be frightening. Clarifying what patients can expect with radiation treatment can alleviate some of this anxiety.

Frequently, women will have their breast cancer treated with more than one method. Radiation is often used after a patient has had surgery or if it has metastasized (spread) to other parts of the body. Radiation involves directing high-energy rays at the area where a tumor developed in order to destroy breast cancer cells.

In general, radiation treatment can be classified into two categories. These two types of radiation are called external and internal beam radiation. These then get broken down into subcategories that will be discussed more later.

A provider will choose when to initiate radiation treatment based on if a patient has had chemotherapy and if the patient has had a mastectomy or breast-conserving surgery (BCS). After your body has some time to heal (anywhere from 2 weeks to a month or more after surgery), radiation can start. Radiation therapy can last more than a month, and the number of treatment sessions that a patient receives on the type of radiation that she/he is getting.

What is external beam radiation?

This is the most common type of radiation treatment for breast cancer and it is important to note that it is painless.

With external beam radiation a machine is placed outside of the body and the radiation beams are aimed at the area where the cancer is. Your provider calculates how much and where to send the radiation prior to you receiving the treatment. This depends on where the cancer is located and whether or not it has spread to the lymph nodes. The provider will also take into account whether or not the patient has had BCS.

With BCS, radiation will likely be focused on the entire breast. Without BCS or lymph node involvement, radiation is focused on the scar, chest wall, and places where drains exit the body after surgery. If lymph nodes have been involved, he/she will also focus radiation on the area where they were found. Each treatment session is quite quick (only lasting a few minutes), but sessions will occur 5 days a week for 5 to 6 weeks making this the longest type of radiation treatment. It should also be made clear that radiation does not stay in your body with this type of treatment, which means you will not go home radioactive. There are some newer accelerated radiation treatments that are starting to become more popular as well.One of these is called intraoperative radiation therapy (IORT) and is discussed later.

Side effects of external beam radiation can impact many parts of the body. In the short term, a patient’s skin may become red, itchy, dry, sore, discolored, blistered, and may even start to peel. She or he may experience breast swelling and heaviness. Fatigue is also to be expected. Long-term side effects are also possible. These involve the breast becoming smaller and firmer as well as difficulty breastfeeding. Nerve damage and swelling or pain in the arms and chest are also possible. Rarely, patients may experience weak or fractured ribs, and may develop cancer in the lining of their blood vessels.

What is internal beam radiation?

This is also known as brachytherapy. With this type of radiation, the provider places a device in the part of the body where breast cancer was discovered. This device contains radioactive seeds that will target the area where breast cancer is most likely to return. This type of radiation has fewer side effects and only takes a week to complete. Sometimes a provider may choose to use a combination of both external and internal beam radiation to give some extra radiation to the tumor site, especially if the patient has had BCS.

What are the two types of internal beam radiation?

Interstitial brachytherapy is not commonly used anymore, but it involves the provider placing numerous small tubes into the breast in the area where cancer has been removed. The tubes stay there for a couple days and act as a passageway for small radioactive pellets to reach the area where the cancer was. The radioactive pellets are delivered and removed a few times a day over several days.

IORT is when a single large dose of radiation is given in the operating room immediately after surgery, before the incision is closed. During this process, healthy tissue is protected from the radiation. This type of radiation is not available in many places as it requires special equipment. Side effects include red, dark, dry, or irritated skin, and changes in breast appearance or density.

How effective is radiation?

With cancer treatments constantly advancing, options are steadily increasing for patients. When radiation may not be a treatment option for one patient, there could be another method that works.

Aspirin May Help Prevent Breast Cancer in Women with...

How Breast Cancer Diagnosis and Support Have Changed

What is the best treatment for breast cancer?

Breastfeeding Led to Discovery of Breast Cancer. It Saved Her Life

Three Women in One Family Battle Breast Cancer Together