In 2013, the U.S. Centers for Disease Control and Prevention (CDC) reported that the average smoker smokes 10-19 cigarettes a day, and about 17.8% of the population were active smokers. The first studies linking smoking to gastroesophageal reflux, or acid reflux, discovered that symptoms began emerging in the late 1980s. More than a decade later, a survey in Norway involving more than 29,000 people found that quitting smoking alleviated the symptoms of acid reflux in chronic smokers.

Gastroesophageal reflux, or acid reflux disease, occurs when gastric acid from the stomach leaks backwards into the esophagus, inducing symptoms, like heartburn. Under normal conditions, this is prevented by a band of circular muscles present at the juncture of the end of the esophagus, and the entryway to the stomach. These muscles are known as the lower esophageal sphincter (LES), which keep the stomach contents from leaking out. When the acidic contents leak out, the backwash can irritate and inflame the lining of the esophagus causing this disease.

I quit smoking, will my lungs heal?

Have a question aboutSmoking?Ask a doctor now

Causes and Symptoms of Acid Reflux

Acid reflux is a common disease that affects most of us at some point during our lives. Pre-existing conditions, like obesity, hiatal hernia (a condition in which part of the stomach moves outside the abdominal cavity and pushes into the chest cavity), and other lifestyle choices, like pregnancy, alcoholism, and smoking, are the primary causes of acid reflux.

The common symptoms include:

1) Heartburn:  As the stomach acids ascend to the esophagus, they inflame the epithelial cells lining the food tube initiating a burning sensation called heartburn. This feeling of sudden heat in the upper regions of the abdomen can leave the patient with a sour aftertaste and a dry throat.

2) Chest pain:  The most recognizable symptom of acid reflux is chest pain. This low-grade pain radiates all over the chest cavity causing a heavy, weighted sensation.

3) Dysphagia:  Acid reflux often causes a continually dry throat that manifests into difficulty swallowing. This may sometimes lead to a self-resolving dry cough.

4) Regurgitation of food or sour stomach contents:  Due to the weak muscle action of the LES, semi-digested stomach contents containing a mixture of enzymes and strong acids leak into the esophagus.

Certain changes in one's lifestyle are very effective in curbing acid reflux. Some lifestyle changes include dietary patterns, and regulated sleep and exercise schedules. If acid reflux persists, over-the-counter medications in the form of acetaminophens can be taken to relieve the symptoms. Most medical practitioners may prescribe Proton Pump Inhibiting (PPI) and H2 blocker medications that decrease stomach acid production.

Does smoking cause acid reflux?

Since the 1980's researchers have debated that smoking cigarettes causes acid reflux mostly because not all smokers are prone to developing this disease, although it is predominant among them. In the last two decades, studies have positively linked smoking to acid reflux. The main culprit is nicotine. An average cigarette contains 6-12 mg of nicotine, and about 15% of it is absorbed by the organ systems. This nicotine circulates via the blood and is available up to 8 hours post smoking. In acute and chronic smokers, the nicotine affects the LES by causing it to relax and ultimately remain open. The stomach acids are released just before mealtime and are usually neutralized by bicarbonate ions. Smokers secrete less bicarbonate ions, allowing the acids to remain active for a longer duration in the stomach.

In 2014, the largest study conducted to date found that quitting smoking alleviates acid reflux symptoms in individuals supplemented with anti-reflux medication. This may be due to nicotine’s long-standing side effects, even after cessation of smoking.  So, now you have one more reason to STOP SMOKING!

Do the lungs have the capability to regenerate?

When does smoking start to deteriorate the body?

More from FindATopDoc on Smoking 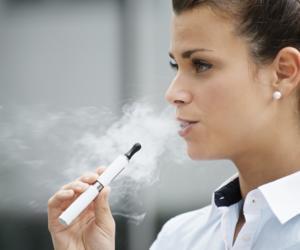 What are Electronic Cigarettes?

Are fruits like watermelon and pineapple okay for people... 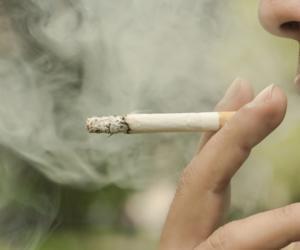 How can I stop burping?

Can a Juul help me stop smoking?