What are the ingredients in flakka/bath salts?

Flakka is the latest synthesized drug which is very comparable to bath salts as both of them have a reputation to develop erratic and violent behaviors from people who ingest them. Flakka can be smoked, snorted, swallowed or injected. It could also be combined with other drugs such as marijuana.

Bath salts are made from MDPV or methylenedioxypyrovalerone, while flakka is made from alpha-PVP or alpha-pyrrolidinovalerophenone. Alpha-PVP is a chemical which is a synthetic version of khat plants which the Somalian pirates chew on. The active ingredient of both flakka and bath salts is a chemical similar to cathinone – a naturally occurring stimulant substance that is found in a shrub known as khat. Both drugs are also made in China and are shipped overseas. Bath salts often contain any of the three stimulant substances which are MDPV, mephedrone or methylone. 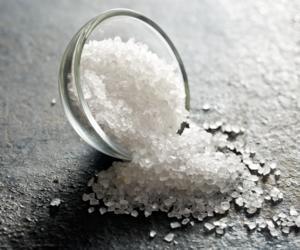 Flakka was made because MDPV, mephedrone and methylone were permanently banned by the Drug Enforcement Administration (DEA). So the manufacturers slightly altered the structure of the chemical formulas of their stimulant substances. Flakka is the new synthetic substance but is also similar to the older substances.

Why is flakka addictive?

The effects of flakka, both immediate and long term, can rival other addictive drugs. Flakka is designed to flood the brain with dopamine. Dopamine is a hormone which helps control the brain’s pleasure and reward centers. It then blocks the transmitters and produces a powerful feeling of euphoria. In normal circumstances, when dopamine is released, there will also be reuptake where it will go back to the original transmitting neuron. However, in the case of flakka, the reuptake of dopamine is blocked thus, it remains there.

Aside from dopamine, norepinephrine – a neurotransmitter, is also increased. This hormone is normally released when the body is under a threat or stress. Norepinephrine is responsible for the so called fight or flight response. An increased level of this hormone can alter breathing, heart rate and blood pressure to an alarming level which can lead to death.

When flakka is used constantly, the natural levels of dopamine and norepinephrine in the body are reduced.

Flakka has been reported to have intense and powerful addictive potential, and it has the ability to stimulate tolerance. The potential addicting effects are not comparable to the real magnitude of toxicity while the addiction could be even higher.

Flakka is a type of synthetic cathinone. Aside from hallucinations and paranoia, flakka can result to excited delirium which can be described as a person so violent and agitated that chewing another person’s face is a normal thing to do.

Flakka does not only sit on the neurons but it is also destroying them. And since flakka hangs around in the brain longer than cocaine, the extent of the damage can be greater.

Is flakka more addictive than meth?

Yes, flakka can be more addictive than the strongest cocaine and crystal meth. It is very hard to control the exact dose of flakka. The difference in the consumption of getting high and dying is so critical as a small overdose can result in a range of intense symptoms.

A normal flakka high can last for one to several hours but the possible neurological effects can be permanent. Flakka has a comedown – the time when the substance leaves the body then the person is left depressed or feeling fatigued. This feeling usually causes users to return to the drug to remove the negative comedown feeling, which jump-starts a cycle of use which can result to abuse. In addition, flakka can alter the brain’s chemistry which makes users want to have larger and larger doses to have the same high, because they can no longer get high from the smaller dose they started with.

The neurological effects of flakka addiction could be treated with drugs like benzodiazepines. These drugs can help counteract the user’s aberrant behavior and agitation. The cardiac effects of this type of drugs can be managed through an intravenous administration of low dose norepinephrine for several hours (not more than 6). Norepinephrine can normalize blood pressure and heart rate.

To ensure full recovery from flakka toxicity, supportive measures along with monitoring and follow-ups are needed.

A medication-assisted treatment can also be helpful. It is managed under supervision to decrease cravings, strengthen abstinence and treat psychological symptoms such as psychosis as well as agitation.

For people experiencing problems with flakka abuse, inpatient or outpatient rehabilitation can help them with their recovery.

Inpatient rehabilitation, also called residential or inpatient treatment, requires the patient to remain or live within a rehab facility to receive treatment. This form of treatment is usually effective as it pulls the patient out from his or her usual environment so that he or she can put all energy and focus into recovery.

Psychological treatments can also help people who are addicted to flakka. Treatments include counseling (individual and group sessions), cognitive behavioral therapy, and contingency management (this is designed to encourage abstinence as well as compliance to treatment program).

The ideal effects of flakka are hallucinations, increase in body temperature and euphoria. Too much intake of flakka, even slightly too high of an intake, can result in serious health complications such as agitation, rapid heart rate, psychosis and extreme aggression or worse, cardiac arrest. It could also cause the muscle tissues to melt and muscle fibers will be released into the blood stream, a condition called rhabdomyolysis. When this happens, the kidneys shut down, thus, survivors of flakka overdose will be on dialysis as long as they live. Other symptoms of flakka overdose include alertness, bizarre behavior, hyperactivity, intense confusion, hypertension, cardiomyopathy, muscle tissue damage, muscle spasms, lung damage, neurotoxicity, loss of touch with reality and delusions.

Withdrawals symptoms from flakka are depression, anxiety, severe fatigue, weight gain, suicidal thoughts, extreme irritability, insomnia and night sweats. People who have been abusing flakka can benefit from medical monitoring as well as management of withdrawals especially in instances where tissue and liver damage or suicide risk is very high. 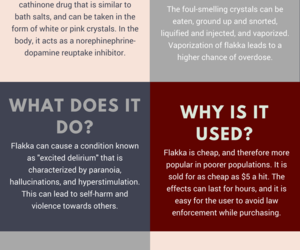 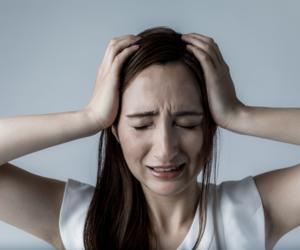