An estimated eighty percent of people with Type II diabetes will also have sleep apnea. The common denominator between the two tends to be being overweight, which when combined with stress and a lack of sleep creates a powerful cocktail that leads to one or the other and the possibility of eventually having both. It’s not clear though which comes first. And just what exactly are these two diseases and how do they work?

What is Obstructive Sleep Apnea?

Obstructive sleep apnea is a disorder that affects as many as twenty-two million in the United States alone. These case range from the mild to severely obstructed with about eighty percent falling well into the moderate to severe category.

What does bone loss in the teeth mean?

It’s a disorder characterized by sleep interruptions that can be anywhere from five to fifty a night. They mostly include a blockage of the airways that can happen when the muscles of the throat and the tongue relax when someone sleeps at night. Overly large tonsils that press down on the airway and narrow it when one lays down at night also causes sleep apnea. It’s most commonly caused by sleeping on the back, having alcohol or certain medicines before bed, and most commonly if someone is overweight.

When blockages occur, the affected person is either jolted from sleep or in the most severe cases can stop breathing altogether. Someone may have sleep apnea if they notice that they don’t have much energy and are sleepy despite getting a full night sleep, or they wake up with headaches. People that suffer from sleep apnea are almost always snorers, but they also tend to toss and turn at night, and their partners may notice that they gasp or choke while asleep.

Sleep apnea can be a potential fatal disorder and if you suspect that you may be afflicted you should consult your physician as soon as you can and try to get into a sleep study to gauge how often you stop breathing and how little air your lungs receive during the course of the night. In the meantime there are some things that you can do on your own to perhaps lessen the symptoms and be more productive during your daytime hours.

Diabetes is a disease that affects an estimated one million people or more in the United states alone. It’s a disease that’s characterized by the body’s inability to make, process or use insulin sufficiently. Diabetes can affect just about anyone but there are risk factors that make some more susceptible than others. By far obesity is the biggest risk factor, followed by a family history of the disease. Blood glucose or sugar is what the body uses for energy, insulin the hormone that helps to convert the glucose into energy for use in other parts of the body is created in the pancreas, it uses the food that is consumed to create insulin. When the pancreas is unable to convert the glucose for use by the body, it stays in the blood stream and builds up causing other health issues.

Type II diabetes is usually diagnosed in adults of middle age, but can also be found in children and is often brought on by obesity. While the pancreas in type II diabetes can sometimes make insulin, it may not make enough or the body will not use what is made efficiently. As can plainly be seen, the main correlation and common cause of both obstructive sleep apnea and Type II diabetes is obesity.

The question is does sleep apnea cause diabetes, or does diabetes cause sleep apnea? A study in two thousand fourteen showed that of patients with severe obstructive sleep apnea one in three will develop diabetes and over half of all diabetics suffer from sleep apnea. Diabetics tend to have much poorer sleep patterns that non diabetics, their kidneys excrete excess glucose even without sleeping disorders, which means more waking to visit the bathroom at night.

The hormone melatonin not only regulates the sleep wake balance of the body, it also helps in release of insulin from the pancreas to aid in regulating the blood sugar levels. Most diabetics struggle with a melatonin imbalance so the insulin glucose level is thrown off. Another hormone, leptin resistance which causes a depression in the respiratory system and which can upset breathing patterns. A lack of sleep can raise the blood glucose levels, it can also strengthen insulin resistance and glucose intolerance which leads to diabetes. But at the same time, diabetics tend towards sleep breathing issues which can then lead to apnea so It’s not exactly a clear cut picture but pre-diabetics that have apnea usually develop Type II diabetes.

The body is a system of chemicals and organs that work in synergy to keep the body in peak performance, any imbalance in this chemical makeup with first affect the organs individually, then systematically causing a breakdown along the chain of operations.

In sleep apnea the blockage of the airways cause the body to not get the amount of oxygen that it needs, the proper levels of oxygen don’t reach the blood that way that it should and can result in hypoxia, the brain will then send messages to the diaphragm and lungs to remind the sleeper to breathe. Stress hormones are then released into the bloodstream and these will wake the sleeper in an attempt to get them to breathe so that the body can be properly oxygenated. The constant system correction of lapse in breathing while sleeping, flood of stress hormones and waking in order to breathe over weeks or months at a time, will eventually lead to a rise in glucose levels and result in insulin sensitivity. Protracted insulin sensitivity in turn leads to insulin resistance as the beta cells pump out way more insulin that the body is able to use properly, leading to glucose intolerance and eventually diabetes.

Curing one to Manage the Other?

There is no cure for diabetes, so the question becomes is it possible to treat sleep apnea before it throws the body into insulin resistance and glucose intolerance? In order for that to happen the sleeper must be aware that something in their sleep cycle is off, as most people when they’re awoken by a sleep apnea event at night will not remember it because the waking period will usually only last about thirty seconds, but these events can happen up to fifty times per night so a feeling of tiredness throughout the day even when they think they’ve had a full night’s rest will be commonplace.

The first two clues that may point to sleep apnea is a combination of snoring and being overweight, almost a hundred percent of those with sleep apnea will be snorers. The weight is an easy enough fix those that suspect they may have sleep apnea can start a fitness routine that can help them to shed excess poundage. If that doesn’t work the next step it to see a physician who will ask a battery of elimination questions and then perhaps recommend a sleep study that uses a few different methods of determination and possible suggestions for eliminating the apnea.

Having sleep apnea is not a guarantee that one will develop diabetes, especially if caught early enough for treatment, but many who suffer sleep apnea will eventually develop the disease.

What Are the Effects of Oversleeping?

Will my diabetes go away if I start eating right?

Can naturopathy help us with my mother's diabetes? 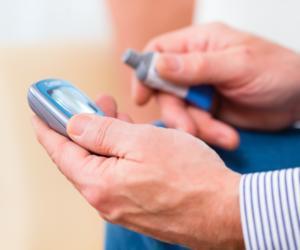 A Trulia Entrepreneur and His Solution to End Type 2 Diabetes