Epistaxis or commonly called a nosebleed is defined as a type of bleeding that occurs from the nostrils, the nasal cavity, or the nasopharynx.

Epistaxis or commonly called a nosebleed is defined as a type of bleeding that occurs from the nostrils, the nasal cavity, or the nasopharynx. Nosebleeds are mostly caused by the rupture of blood vessels inside the nose. Bleeding may be spontaneous or caused by injuries or trauma. Nosebleeds usually go away on their own and are rarely a cause for concern.

Epistaxis is categorized according to the site of bleeding: 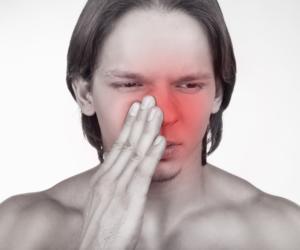 What are the Causes and Treatment for Nosebleeds?

Have a question aboutEpistaxis?Ask a doctor now

At some point in time, around 60 percent of the population will experience epistaxis and approximately 6 percent may need immediate medical attention.

Most cases of epistaxis have unknown causes. However, its other common causes include trauma, the use of certain medications, nasal or sinus surgeries, or tumors.

Heated indoor air can dehydrate the nasal membranes and make the blood vessels more prone to rupture. For this reason, nosebleeds are more likely experienced during the winter season and dry climates.

Frequent or recurring nosebleeds may be due to any of the following conditions:

Most nosebleeds are not considered as a medical emergency. However, if a nosebleed lasts for more than 20 minutes or occurs after an accident or injury, seek immediate medical attention. It may be something more serious, such as a posterior nosebleed.

Injuries due to a vehicular accident, a punch in the face, or a fall may cause a nosebleed. If a nosebleed occurs after an injury, it may be a sign of an internal bleeding, skull fracture, or a broken nose.

To determine the cause of the nosebleed, the doctor will first perform a physical examination. The doctor will check for any foreign objects in your nose and ask questions regarding your other symptoms, current medications, medical history, and if you have had any recent injuries.

There is no specific test that can identify the exact cause of nosebleeds. However, doctors may use certain diagnostic tests to help determine the cause. They include:

When it comes to treating nosebleeds, it is important to try to determine the site of the bleeding, whether it is in the front (anterior) or back of the nose (posterior). Medical attention is required in posterior nosebleeds.

Anterior nosebleeds are often due to dry air. This can be prevented by gently applying petroleum jelly, saline gel, or topical antibiotic inside the nose, particularly the septum, through the use of a Q-tip.

The following steps can help stop an anterior nosebleed:

A cold compress can also be applied over the bridge of the nose to help close off small, ruptured blood vessels.

Treatment of posterior nosebleeds generally includes nasal packing and/or cautery, which involves the burning and sealing of blood vessels to stop and prevent further bleeding.

It is important to see an otolaryngologist or an ENT (ear, nose, and throat) specialist if you frequently experience nosebleeds. These specialists will thoroughly examine your nose using an endoscope before recommending treatment.

Although you cannot always prevent a nosebleed from happening, there are ways to reduce your risk of getting it:

Certain medications can make nosebleeds worse. Consult your doctor if you have any concerns regarding its side effects, particularly nosebleeds. Do not stop taking your medications unless your healthcare provider tells you otherwise.

How Can I Stop a Nosebleed? (January 2017). https://www.webmd.com/first-aid/nosebleeds-causes-and-treatments

What should be the first aid for nose bleeding?

More from FindATopDoc on Epistaxis