Nosebleeds in kids can be startling and scary for parents, but they are not usually a cause for concern.

Read on to know the common causes of nosebleeds in kids, what you can do to treat them, and how to prevent them from occurring again. 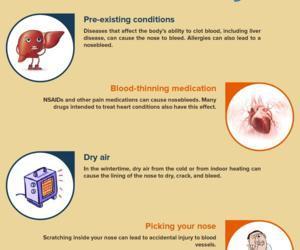 Have a question aboutNosebleed?Ask a doctor now

When the blood vessels that line the inside of the nose break and bleed, a nosebleed can happen. These blood vessels are also more prone to injury because they lie near the surface and are very fragile.

The following are some of the causes of nosebleeds in children:

In rare cases, nosebleeds can also happen when children have injuries outside of their head, face, or nose. When this happens, seek immediate medical attention.

Their common symptoms often include:

Some children may only have 1-2 nosebleeds over a certain period of time, but others tend to experience them more. Frequent nosebleeds can happen if there is constant irritation in the lining of the nose, which continues to expose the blood vessels that easily bleed. The nasal septum or the cartilage that separates the nose in half is the most common site of blood vessel injury.

How to Stop a Nosebleed

The following steps can generally slow down or stop nosebleeds in children:

The following remedies can help combat dryness in the lining of the nose:

Your child needs to see a doctor or visit the nearest emergency department if your child has any of the following signs and symptoms:

How to Prevent a Nosebleed

You can ask your pediatrician about the daily use of saline (saltwater) nasal drops if your child easily gets nosebleeds, and if you live in a dry climate. Moreover, to help prevent nasal drying, use a vaporizer or humidifier to help keep your home at high humidity levels.

Also, make sure to tell your child to avoid nose picking. Keep your child's fingernails clean and short to avoid tearing the blood vessels when he inevitably picks his nose.

Nosebleeds in Children: Causes, Treatment, and Prevention. (May 2016)

Chronic Nosebleeds: What To Do. (6/1/2009). https://www.healthychildren.org/English/health-issues/conditions/ear-nose-throat/Pages/Chronic-Nosebleeds-What-To-Do.aspx

What are the Causes and Treatment for Nosebleeds?

More from FindATopDoc on Nosebleed

What is the main cause of a nosebleed?

What should be the first aid for nose bleeding?