1 What is alcohol poisoning?

Alcohol poisoning is a serious condition caused by an alcohol overdose, resulting in a life-threatening situation.

The levels of alcohol in the blood increase to a toxic amount. It may occur unintentionally, when someone drinks products containing alcohol. Patients may have shallow breathing and be confused or disoriented, sometimes even going into a coma stage.

It is a serious situation that requires immediate medical attention. If a patient is suspected to have alcohol poisoning, they should be taken to the doctor immediately.

Understanding the warning signals is crucial for seeking help at the right time.

Can medications give you a false positive on a drug...

Have a question aboutAlcoholism And Alcohol Abuse?Ask a doctor now

Signs and symptoms of alcohol poisoning are:

One should not wait to see all of these symptoms to seek medical help for a friend who is thought to have alcohol poisoning.

It is possible that a person with alcohol intoxication may choke to death on his or her own vomit, and hence it is important not to leave them alone.

Keeping the person in a sitting position or keeping their head to one side can prevent choking.

In some serious cases, breathing may stop completely. Severe dehydration may result in brain damage. 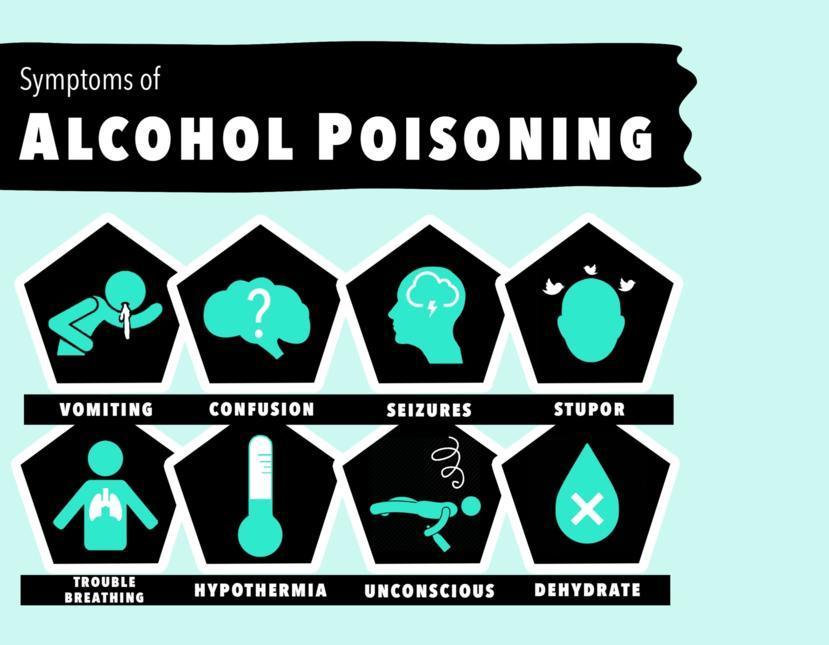 The body can process one unit of alcohol per hour. When there is a heavy consumption of alcohol during a short duration, the liver, which is involved in filtering out alcohol from blood, cannot process all of it. This leads to the rise of BAC, also known as blood alcohol concentration. If the BAC level is high enough, alcohol poisoning occurs. Household drinks containing alcohol may be a source of alcohol poisoning especially to children.

Alcohol poisoning is caused by consuming too many alcoholic beverages, or products that contain alcohol, within a short period of time.

Mixed drinks take more time to process and have more levels of alcohol in one serving.

Some of the factors that increase the risk of alcohol poisoning include:

Among different age groups, young adults have an increased chance of getting alcohol poisoning, and men are more likely to have symptoms than women are.

The absorption of alcohol depends on the body size. Symptoms affect people with a smaller body size more easily. A high tolerance increases the risk of poisoning.

Diabetes and drug abuse also increase the risk of an alcohol overdose. 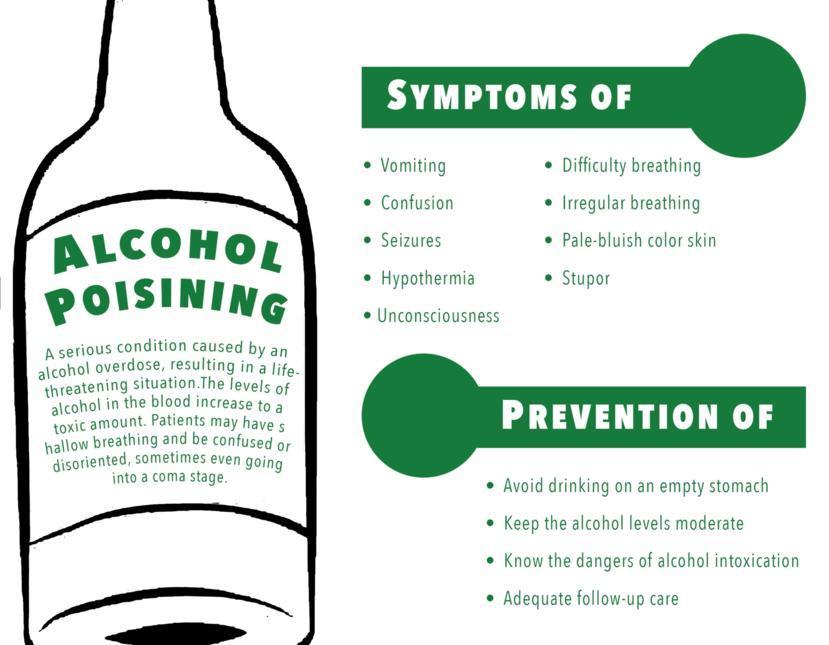 Drinking himself into unconsciousness

Is there any medication to help my husband quit alcohol?

5 What’s the outcome of alcohol consumption?

At this stage it is advisable not to take any more alcohol.

Men and women who drink almost on a daily basis are counseled to spread their drinking sprees evenly throughout the week to reduce harming their health. They are also advised to not drink more than 14 units of alcohol per week.

This is the most commonly used metric and representation of alcohol intoxication in the bloodstream for legal reasons. This is used to know if an individual is intoxicated by alcohol, especially when under laws barring such practices. In motorist regulation, BAC is expressed as a percentage of alcohol in the blood per volume. For example, 0.20%. All states have explicit BAC limits, and as stated by these laws, handling a vehicle while your BAC limit is above the stipulated one is illegal.

The diagnosis of alcohol poisoning is usually based on symptoms, drinking habits, and family history.

Blood tests and urine tests are also suggested for checking the levels of alcohol in the blood.

Low blood sugar is another indicator of an alcohol overdose.

9 Differentiating a hangover and alcohol poisoning

There is a clear-cut difference between a hangover and alcohol poisoning, and knowing this can come out to be valuable in saving lives.

A hangover can be described as an unpleasant reaction of a recent, slight overdose of alcoholic drinks in the body system. Normally it would be easier to recuperate from a hangover, although the seriousness of a hangover is determined by:

Supportive care for the person is very important during the treatment of alcohol poisoning. The patient is constantly monitored during this period.

Special care is taken to prevent choking and breathing problems, and an intravenous drip is given to prevent dehydration and also to regulate the amount of glucose and vitamins in the blood.

In some cases, the stomach is pumped to flush out the toxic materials.

For unintentional consumption of isopropyl alcohol or methanol, kidney dialysis is recommended to remove the toxic materials immediately.

At the hospital, alcohol poisoning victims will be closely watched until the level of alcohol in the blood subsides. If any treatment is required, it may include:

Giving a stimulant drink such as coffee is never a good solution. In fact, coffee can lead to a worsened state of dehydration. Caffeine and alcohol do not blend well, and it is misleading to reason that you are keeping the person wide awake while drunk.

Another thing to avoid is letting the victim sleep off the alcohol. When the person sleeps there will be no way of surveying internal consistency, and if you leave the person’s side he or she may throw up and choke on it.

Finally, giving more alcohol will not help either, and it is also bad logic since this cannot ease the trembling but might even harm the victim more by increasing BAC levels.

It is important to know that treating alcohol poisoning at home is not a wise decision, and professional medical treatment should be consulted. However, ‘drinking too much’ and ‘alcohol poisoning’ should not be confused, and being aware of the symptoms might actually save a life. If you are sure alcohol has spiked up to poisonous levels do not attempt home treatment but get emergency medical help.

Lifestyle modifications, such as drinking alcohol in moderation, are necessary for controlling alcohol poisoning.

Be aware of the consequences of alcohol intake and alcohol poisoning.

16 Future management of the symptoms of alcohol poisoning

If there is a suspected case of alcohol poisoning, it is of the essence to seek medical help as soon as possible. The remedy will also be influenced by how serious the symptoms have developed in the victim.

Immediate alcohol poisoning treatment is important and can avoid serious complications, but still, alcohol overdose can cause neurologic symptoms such as seizures leading to brain damage if oxygen to the brain diminishes.

Managing to recover without many expected complications means that treatment will be much easier.

Alcohol poisoning results in a number of complications like:

This habit involves consumption of excess alcohol in a span of a short time. For men, it is identified as having more than five drinks in less than a two-hour time limit. For women, it is defined as having four or more drinks within a two-hour period. Normally, after binge drinking, blood alcohol concentration will rise above 0.08% or even higher.

In the United States, binge drinking is a habit for adults above 26 years and it is estimated that they form almost 70% of dangerous binge drinking incidents. Binge drinking may require a less amount of alcohol for people who are undergoing medication before it reaches toxic levels.

Although binge drinking is not equal to alcohol drinking disorder (AUD), it does open the window for more alcohol-related disorders or an alcohol misuse problem. Serious health complications can develop if binge drinking leads to alcoholism.

Motives which lead to binge drinking

Even with plenty of research studies that show the effect of excessive alcohol consumption, the number of people who drink alcohol continues to increase. Although viewed as a fun pastime, it is harmful and can really cause a lot of damage to you and those around you.

The most common reasons why people binge drink include:

19 Connection between the liver and alcohol

Functions of the liver include:

Each time the liver filters alcohol, some liver cells die. Being able to withstand tough conditions, it will regenerate itself. Prolonged consumption of alcohol in large amounts will reduce the ability of the liver to generate new cells and can damage the liver permanently.

The number of United States citizens diagnosed with ARLD over the previous years has been increasing due to alcohol abuse.

ARLD refers to damage caused by excessive alcohol intake. There are several stages in the buildup and severity of ARLD symptoms. Although there are no symptoms until the liver is badly damaged, they include:

There are three main stages which extend into each other:

Alcoholic hepatitis is not related to infectious hepatitis, however, is a serious condition caused by prolonged abuse of alcohol. It is the first indication that continuous alcohol consumption is damaging the liver. Alcoholic hepatitis can also be caused by binge drinking, although not always.

Even at this stage, though the liver has been severely damaged, there may be no symptoms. Generally cirrhosis cannot be undone, but stopping drinking as soon as possible will help to prevent further damage to the liver. A person who drinks and has cirrhosis has a 50% chance of extending their life for more than five years.

Currently the best remedy is to stop drinking for the remaining part of your life since there is no effective medical treatment yet. This also reduces the risk of damaging the liver and also gives the best odds for recovering.

Stopping to drink alcohol may be difficult but it can be achieved by proper encouragement, advice and medical treatment from alcohol assistance centers available locally.

When you stop drinking and the liver still does not restore its normal functionality, a liver transplant is needed, especially in severe cases. You will only be referred for a liver transplant if you develop more complications of cirrhosis, even after stopping drinking. Before transplant it is vital not to drink, and also after the transplant has been successful you must not drink for the rest of your life.

21 When do you require medical help?

If there is a suspected case of alcohol poisoning, seek emergency medical services immediately. Some measures can be taken to stabilize the situation:

Never let the victim doze off since alcohol levels in blood can rise steadily, long after the last drink, making the alcohol poisoning symptoms more severe in an instant.

Do not attempt to give any stimulant drink or more alcohol, as these do not lessen alcohol intoxication levels and instead can be very perilous. It is better to take the person for a stroll or have him or her take a cold shower.

More from FindATopDoc on Alcoholism And Alcohol Abuse

How should I counsel my husband to stop drinking alcohol? 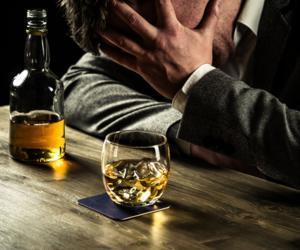 What is the role of a psychiatrist in treating alcohol addiction?

Drinking himself into unconsciousness

How should I counsel my husband to stop drinking alcohol?

Can medications give you a false positive on a drug test?

Should I see a psychologist or psychiatrist for alcohol addiction?

Is alcohol addiction a genetic condition?