Anihidrosis refers to the inability of the body to sweat normally. Lack of sweat response to heat may lead to complications as the body fails to cool down. It leads to overheating and sometimes to potentially fatal condition like heat stroke.

The symptoms of anihidrosis often go unnoticed. It is caused by several factors like skin trauma and certain conditions. It may be seen as an isolated condition or associated with other conditions.

Localized anihidrosis may not require any specific treatment as sweating from other parts of the body compensate and cause adequate heat loss. When anihidrosis affects a large part of the body, it is important to find the underlying cause for the condition.

Where is the acupuncture point for migraine?

Have a question aboutSweat?Ask a doctor now

Most common symptoms of anihidrosis are:

Body fails to cool properly and this causes heat exhaustion or heat stroke, particularly after physical exertion or hot weather. Anihidrosis may develop as a condition on its own or be associated with other conditions like diabetes and skin injury.

Major risk factors of anihidrosis are age, certain medical conditions, skin disorders, and genetic abnormalities. It is more common among children, and people above 65 years. Medical conditions that affect nerves, like diabetes, increase the risk of developing anihidrosis.

Psoriasis, exfoliative dermatitis, and scleroderma are skin disorders that cause scaling, rashes and dry skin, also are risk factors for anihidrosis.

Diagnosis of Anhidrosis is based on symptoms, medical history, and physical examination. Sweat test and skin biopsy also aid in identifying the abnormalities that lead to anihidrosis.

Thermoregulatory sweat test – this test is based on proportional sweat production to increase in temperature. In this test, the body is covered with alizarin red powder. This powder changes color from orange to purple with sweat.

The patient then enters an infrared chamber which has temperature and humidity controlled. Photographs of sweating helps to map the areas of anihidrosis.

Biopsy – analyzing samples of skin cells, and sweat glands helps to identify abnormalities in structure and function of the tissue. 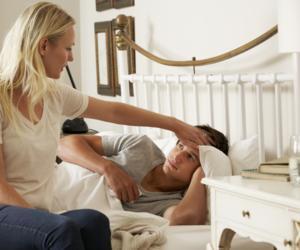 How Do You Get Mono?

Localized for of anihidrosis may not require specific treatment. But lack of sweating in most parts of the body is life-threatening and requires medical attention. Treatment of this condition is based on the underlying cause of anihidrosis.

Treatment also focus on controlling the symptoms of overheating.

Heat cramps are controlled by:

Heat exhaustion and heat stroke are controlled by taking the person to a cooler place and removing heavy clothing. The patient is given plenty of cool liquids to prevent dehydration.

Both the conditions require medical attention to avoid complications. Sponging the person with cool water or wrapping in wet cloth also helps to keep the heat down.

Anihidrosis cannot be prevented as such, but the complications of the condition can be avoided. People with this condition should wear loose, comfortable clothing when it is hot. Avoid strenuous physical activity and stay indoors to avoid hear exhaustion and heat stroke.

Several alternative and homeopathic remedies are used for anihidrosis.

Cucumber, sea salt, and baking soda are suggested for anihidrosis in herbal treatment. A number of medicines are suggested in homeopathy for suppressed perspiration.

Lifestyle modifications are necessary in order to cope with Anhidrosis.

If there is a chance of overheating due to scanty sweat, taking a cool shower helps to cool down.

Ensure to drink plenty of liquids with electrolytes.

Avoid hot places and try to stay indoors or in cool places.

Overheating result in heat cramps, exhaustion, and heat stroke are the complications associated with anihidrosis. Heat cramps lead to muscle spasms which cause severe leg pain.

Heat exhaustion result in rapid heartbeat, weakness, nausea, and dizziness. These symptoms may become worse soon and hence should be controlled. Heat stroke lead to hallucinations, loss of consciousness, coma, even death.

More from FindATopDoc on Sweat

Why can't I get pregnant?

My father suddenly has symptoms like sweating and uneasiness....

My father suddenly has symptoms like sweating and uneasiness. Could it mean something?

Ultrasound Therapy Can Be Used to Reduce Sweat