Here is a list of the top 10 dangerous diseases men can face in their lifetime. Don't be alarmed; many of these diseases are preventable and treatable.

What can cause a painful ejaculation?

Heart attacks are caused by a blockage of any arteries that supply blood to the heart. Arteries can get clogged by fats, blood clots, or other outside influences. If an individual suffers from cardiac arrest, the heart has been faced with an electrical problem. In some cases, the electrical rhythms of the heart become irregular beats, affecting the flow of blood pumped in the heart. Even though the two conditions are very different, heart attacks can actually lead to cardiac arrest.

The risk of this condition begins as early as 20-years-old. High cholesterol, or hypercholesteremia, increases the risk of heart attack, stroke, and peripheral artery disease considerably. The levels of cholesterol are affected by a number of factors, including diet, level of physical activity, body weight, and an individual's biology. When the levels of this fatty substance peaks, it starts accumulating inside the blood vessels and can eventually block the supply of blood to the heart. High cholesterol can lead to a heart attack, and if it happens in a blood vessels that supply oxygen to the brain, it may result in a stroke.

This the 4th leading cause of death in men. Most men consider strokes to be a disease associated with aging, and the majority have difficulty identifying the symptoms. Strokes are more common among men above the age of 65-years-old, however, that does not mean they can't occur among young men. Strokes can lead to death or severely debilitated conditions. There are two types of strokes: ischemic strokes and hemorrhagic strokes. An ischemic stroke is the most common form, and are caused by the blockage of an artery, that carries blood to the brain. Hemorrhagic strokes are more devastating, and are caused by a hemorrhage in the brain.

The most common form of diabetes is type 2 diabetes, or non-insulin dependent diabetes, covering about 90% people who are diagnosed with diabetes. People who have this condition can still produce insulin, but it is either insufficient or the body is not able to utilize it properly. This results in the buildup of sugar in the blood and can lead to dehydration, a coma, kidney and heart damage, and a stroke.

This is the leading cause of death due to cancer in men. It is one of the most preventable forms of cancer, with a risk as high as 30 times more in a regular smoker, when compared to a non-smoker. More than 90% of lung cancers are caused by smoking. Even though there are rapid advances in the medical field, the chances of survival with this cancer is still unlikely.

This is the 2nd leading cause of death due to cancer, in men. Early diagnosis can be of immense help in controlling the situation. About 6% of men in the U.S. develop this form of cancer. A number of factors, including age, family history, inflammatory bowel disease, and certain lifestyle factors increase the risk of this cancer. This cancer develops slowly, and in its primitive stages, begins as a small polyp. Polyps then grow bigger in size and can turn into cancer. Regularly scheduled colonoscopies can often find this early and treat it before it becomes late stage.

All men are at risk of prostate diseases. Some of the most common prostate diseases include benign prostatic hyperplasia, prostate cancer, and prostatitis. Benign prostatic hyperplasia refers to the enlargement of the prostate gland, and the risk of developing this condition increases with age. Prostate cancer is the most common cancer in men. About one in six men will be diagnosed with prostate cancer in their lifetime. Prostatitis refers to the inflammation, or infection, of the prostate gland. This is more common among young and middle-aged men.

Depression can dictate an individual's mood and behavior. Suicide is the 8th leading cause of death among men, and depression is one of the catalysts for this detrimental choice. Although the symptoms of depression in a man are different from that of a woman, depression in men often goes untreated. About 7% of men in the U.S. suffer from depression, and is commonly developed from other medical conditions, like cancer, diabetes, heart disease, HIV and stroke. 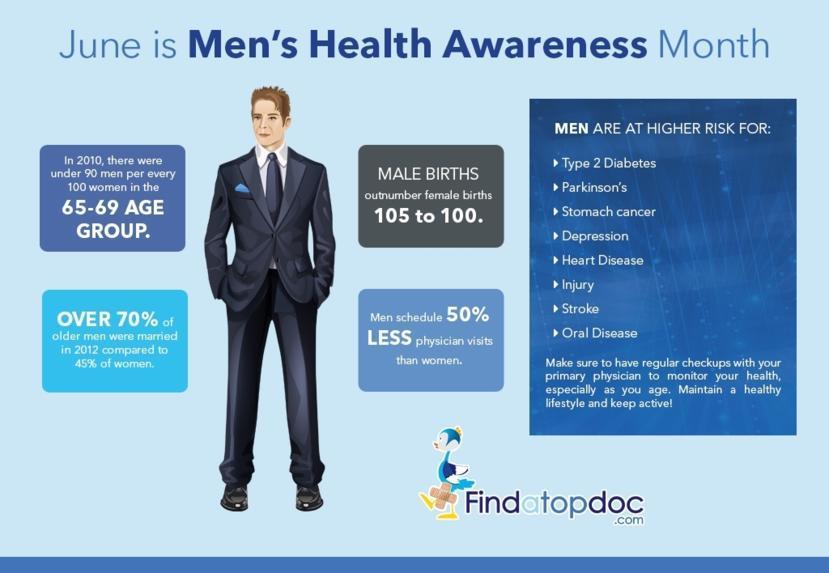 A Woman’s Guide to Keeping Your Man Healthy

How to calm nerves before seeing a proctologist?

More from FindATopDoc on Men's health

Why does it hurt when I have an erection?

A Woman’s Guide to Keeping Your Man Healthy