Digestion is when the body breaks down the food we consume into smaller particles to get absorbed into the bloodstream. The entire digestion process is divided into three different stages: oral, gastric, and intestinal.

Have a question aboutDigestion?Ask a doctor now

The Process of Digestion

The entire process of digestion is divided into three different stages:

This stage involves the process of chewing in which the food breaks down into smaller particles and then gets mixed with the saliva. There is an enzyme present in the saliva called amylase that acts on the carbohydrates present in the food to begin the process of digestion. These small food particles would then form a soft mass called bolus, so it would become easy to swallow.

There is an enzyme present in the stomach called pepsin, which further helps break down the proteins contained in the smaller food particles. The acid present in the stomach plays a very important role when it comes to the prevention of food-borne illnesses, including killing harmful viruses or bacteria that may have existed in the food.

The removed water and nutrients from the digested food would pass through the walls of the small intestine. They would enter the bloodstream and then travel to the different parts of the body, where they are further used for building

Any undigested or unabsorbed food particles move to the colon or large intestine, where more water and nutrients get absorbed. Remaining food particles are then stored in the rectum until it exits the body through defecation.

How long does it take to digest food?

In most cases, food moves through the stomach and then into the small intestine within a period of 6-8 hours. Food would then pass into the colon or large intestine. The exact time of food moving through the bowels may vary and depends on the following factors:

Once food has reached the large intestine, it can stay there for one day or more for further breakdown.

How does the body control the process of digestion?

The cells that line the stomach and small intestine produce and release the hormones, which help control the process of digestion. These hormones are the ones that tell the body when to produce digestive juices. They also send signals to the brain whenever a person is hungry or full. Hormones are also produced by the pancreas, which is also an important organ for digestion and the regulation of blood sugar levels.

Conditions that Affect the Process of Digestion

Certain digestive issues can disrupt the process of digestion. These conditions would cause symptoms, such as heartburn, gas, bloating, diarrhea, or constipation.

How to Improve Digestion

To enjoy a healthy digestive system and prevent other digestive problems, try the following tips below:

What is the best medicine for treating a weak gut?

More from FindATopDoc on Digestion

How can I tell if I have a digestive issue? 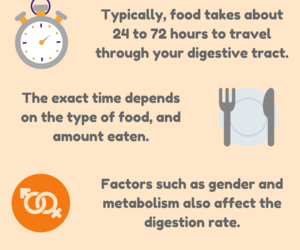 How Long Does It Take To Digest Food?

Can acupuncture treat my digestive disorders?

Does radiation during cancer treatment have any impact on the digestive system?

Can acupuncture treat my digestive disorders?