Torus palatinus is a painless bony protrusion that appears in the middle of the hard palate. The growth usually varies in shape and size. Approximately 20-30 percent of the population develops this condition and is more commonly seen in Asian women and Inuits.

How many times a day should I brush my teeth?

The exact cause of torus palatinus is still unknown, although researchers highly suspect a genetic factor, saying that people with torus palatinus might pass the condition on to the next generation. However, there are also other potential causes of this condition, and they include:

Torus palatinus is a benign and pain-free condition. There are many people who even have normal and healthy lives in spite of having a torus palatinus growth. However, if the growth significantly interferes with your daily life, surgery may be recommended by your doctor.

This cyst is known to develop in the region just behind the two front teeth, which the dentist would call as the incisive papilla. Sometimes, it is also called a cyst of the palatine papilla.

Normally, these cysts do not cause any pain and are often unnoticeable. However, if a cyst gets infected or causes an irritation, then the doctor can get them surgically removed surgically.

Canker sores are mostly white, red, or yellow-colored sores that may occur at the roof of the mouth or tongue. It can also be present inside the cheeks and lips. These canker sores can develop at any time but are not contagious.

Few of the other symptoms of canker sores include a sore or painful throat and trouble swallowing. They usually resolve on their own within a period of 5-10 days. For those who have a painful canker sore, an over-the-counter numbing agent called benzocaine can be used. Apart from medications, numerous home remedies can also help to naturally get rid of canker sores.

Cold sores are blisters that are filled with fluid. They usually appear on the lips, but in a few other cases, they can also form on the roof of the mouth. These cold sores are caused by a virus called herpes simplex virus. At times, the symptoms are not easily identified because a person with the infection may not experience any symptoms at all.

Some of the symptoms that can possibly occur may include:

Within a few weeks, cold sores may heal on their own. However, they quite contagious until they are completely healed. The use of certain prescription medications such as valacyclovir can help in speeding up the healing process.

Epstein pearls are whitish-yellow cysts that are mostly seen in newborns. These nodules usually form on a newborn's gums or roof of the mouth. In some cases, they even look similar to emerging teeth. For this reason, parents may believe that these growths are new emerging teeth, which are not. Weeks after a baby is born, Epstein pearls tend to go away on their own.

A mucocele is a harmless cyst described as soft swelling in the mouth. These cysts are usually formed when a person has a small injury that tends to irritate the salivary gland causing mucus to build-up. Mucoceles are usually painless and moveable. They are also round and dome-shaped with a diameter of 2-10 millimeters. They can be bluish in color or have a semi-transparent or pearly surface.

Mucoceles do not necessarily need treatment since they heal after several days or weeks. They usually rupture, particularly while a person is eating.

Also commonly called as smoker's palate, nicotine stomatitis is a condition that is characterized by a cracked white appearance with red dots on the roof of the mouth. It is also called by other names, such as smoker's keratosis, stomatitis nicotina, and nicotinic stomatitis.

It is usually caused by extreme heat in your mouth, particularly from smoking. Reverse cigarette smokers and pipe smokers are more prone to developing this condition.

Squamous cell papilloma is caused by the human papillomavirus (HPV). They are benign masses that can form on the roof of your mouth, tongue, lips, or inside the surface of your cheeks. In most cases, treatment is not always required. However, if they cause discomfort or any problems, they can be surgically removed.

Hyperdontia is a condition that is characterized by extra teeth. Another term for hyperdontia is supernumerary teeth. Having too many teeth can put pressure on the jaws and gums, making them painful and swollen. In most cases, extra teeth develop on the roof of the mouth and behind the two front teeth.

Mouth injuries such as cuts, burns, and irritation can also cause the formation of bumps on the roof of your mouth. If there is an ongoing irritation due to dentures and other types of devices, a scar tissue called oral fibroma may also develop.

Most minor oral injuries tend to heal on their own after a few days. However, rinsing your mouth using diluted hydrogen peroxide or warm salt water can help prevent infection and speed up the healing process.

Oral cancer can affect any part of the oral cavity, including the roof of your mouth and lips. Below are some of the symptoms of oral cancer:

Treatment usually depends on the stage and location of cancer. If you use tobacco products, you also increase your risk of developing oral cancer. See a doctor if you notice an unusual lump anywhere in your mouth, especially if you are a smoker.

Although most bumps on the roof of your mouth are not always a cause for concern, you may see your healthcare provider if you have any of the following symptoms:

Can your oral health affect your overall health?

What can be the cause of my gum pain?

Is brushing your teeth once a day okay? 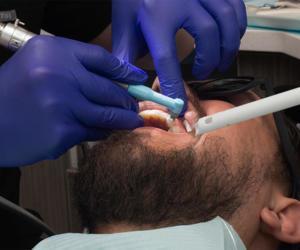 Things To Remember When Selecting A Dentist For Your...

Will I need anesthesia for a root canal?

Is having a tooth pulled considered oral surgery?

Do you recommend Quip?

Can your oral health affect your overall health?