1 What is pernicious anemia?

Pernicious anemia is a disorder wherein your small intestine fails to absorb vitamin B12 through a unique component in the body called the “Intrinsic Factor” (IF). The intrinsic factor supplies the body with the needed vitamin B12 in order to produce sufficient amount of red blood cells.

Pernicious anemia risks are higher among those on a restricted diet like vegans, heavy liquor drinkers, and people aged 60 and above and even children.

Other symptoms caused by the deficiency of B12 can lead to nerve damage. These include long-term symptoms like:

The normal process of breaking down nutrients for the body starts with the stomach. Vitamin B12-enriched food goes down to the stomach and combines with the IF to increase red blood cells in the body. Pernicious anemia disrupts this process by making your system autoimmune. This means that your immune system fights the IF resulting in a deficiency in vitamin B12.

When your body is deficient of vitamin B12, abnormally large red blood cells called macrocytes pass the bloodstream and linger in the bone marrow. This condition can induce fatigue because there are less amounts of red blood cells flowing in your bloodstream.

In a nutshell, pernicious anemia causes are the following:

Treatment should be done as early as possible to minimize risks and prevent permanent damage to nerves. Hospitalization is required for severe cases of pernicious anemia so that doctors can closely monitor the progress of medications and tests. Therapy such as correction of bowel bacterial growth, pancreatitis, and hypokalemia would also be performed. 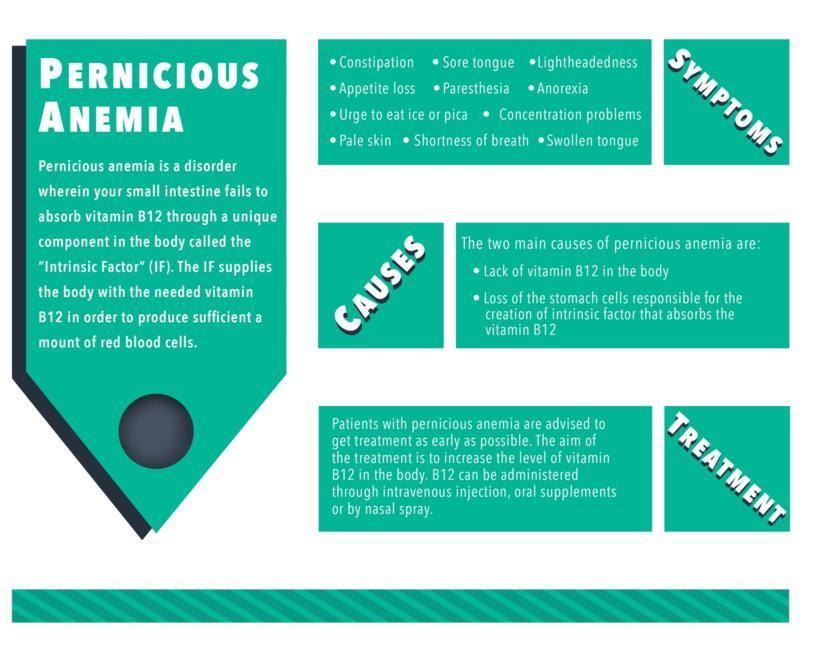 Is acupuncture once a month enough?

What are some unexpected sources of caffeine?

Long-term diagnosis is needed to make an accurate conclusion that the patient is indeed positive of pernicious anemia. In a survey done by 900 members of the Pernicious Anemia Society, 44% was diagnosed with a different problem other than pernicious anemia, and 22% said that they had to wait for two years to correct the diagnosis.

Patients diagnosed with pernicious anemia have also found to have atrophic gastritis or the recurrent inflammation of the gastric mucosa and complete achlorhydria or the absence of gastric acidity.

Diagnosis of pernicious anemia includes a series of medical tests which include:

Aside from these tests, you will be asked by specialists like neurologists, gastroenterologists, cardiologists, and hematologists of any family background about pernicious anemia or medical history on symptoms you have experienced.

Doctors will also monitor irregular heartbeats and nerve damage from your previous experiences. It may take a year or two to correct the disease depending on the consistency of the tests and medications applied.

Patients who are positive of pernicious anemia tongue are screened with redness, cracks and burning pain on their tongue. This is primarily because of changes in appetite and taste.

The indications of a normal and healthy tongue are the presence of little bumps or papillae and light pink appearance which is opposite from having a sore tongue.

A sore tongue is also referred to as glossitis. Glossitis is also a symptom of mouth trauma, allergic reactions, and dry mouth.

Pernicious anemia is linked closely with functions of the nerves. Numbness and pain occur in different body parts because the disease disrupts messages from the brain to the spinal cord which wires most of the basic movements like walking, lifting, and waving.

Indications of pernicious anemia neuropathy include:

Hair loss happens as a result of vitamin B12 deficiency. It can also happen to people with other types of anemia. Vitamin B12 supports the metabolic process of cells in your body and works together with a mineral called folate to counter deficiency in the body. It also functions for replication of DNA, which is responsible for the growth and maintenance of all parts of your body including the cells.

There is little evidence of hair loss being linked to pernicious anemia, but one study in the Indian Journal of Dermatology mentioned that hair changes called “hypopigmentation” occur from a deficiency in vitamin B12.

Shooting pains in the legs, feet, and hands occur as a result of cobalamin deficiency. Patients need to boost their intake of vitamin B12 in order to tolerate and reduce the effects of this symptom.

The signs of peripheral neuropathy joint pain would reflect heavily on patients who are in the process of treatment. These signs include shaking and numbing of hands and legs, forgetfulness and physical exhaustion. Patients will also be advised by their doctors to take more folate in their diet to help in the absorption of vitamin B12.

Vitamin B12 can either be administered orally or through injection. The treatment itself can also benefit patients with bursitis, an inflammation of the bursae, which connect the bones and muscles together. It can affect your shoulders, hips, knees, elbows and heels.

Diet is a crucial factor in pernicious anemia patients. Most people with pernicious anemia consume much liquor and have strict vegetarian diets. These habits can lead to a deficiency in vitamin B12 which is why they need to take supplements regularly to compensate for the loss of vitamin B12.

Some foods that are rich in vitamin B12 are readily available at your local grocery store. You can implement these food items into your weekly meal plan:

Vegans need to consume ten micrograms of vitamin B12 a day to compensate for the lack of B12 in the body that helps fight sore tongue, numbness, fatigue, memory loss, blurred vision, abnormal gait and hallucinations.

A great method of cooking meats and fish for faster absorption of B12 include simmering and frying. Consult a nutritionist to know more about preparing vitamin B12 rich foods. You can also get good sources of B12 from seafood like crabs and clams.

Pernicious anemia has different categories which include:

14 What does pernicious anemia do to your body?

Persons with pernicious anemia can experience different neurological and physical symptoms which can lead to death if not treated. Pernicious anemia attacks the IF produced by your body, so there is a deficiency of vitamin B12 even with regular intake of the B12 supplements.

Pernicious anemia is also a hereditary disease, so it can affect children with parents who have this condition. Northern Europeans or Scandinavians are also more prone to this disease. About 25% of children inherit this disease during pregnancy.

Acquired pernicious anemia is also called Biermer’s disease and is considered a rare type of condition that can also affect young patients with genes of this disease.  There are certain non-profit organizations that also offer treatment like the American Autoimmune Diseases Association and the American Pernicious Anaemia Society.

Pernicious anemia is fatal when left untreated. It is common for most patients who are diagnosed with anemia to overlook symptoms of the illness. There are a lot of common symptoms associated with pernicious anemia which is why a regular medical checkup is advised.

Severe stages of pernicious anemia show symptoms such as:

This disease is a high-risk factor among adults aged 60 and above, and it affects 0.1% of the world’s population. It is also found that 15% of patients are young adults. Patients who have undergone stomach surgery or are diagnosed with Crohn’s Disease, Graves' Disease, Celiac Disease, Addison’s disease, and Type 1 Diabetes are also at risk of pernicious anemia.

There are no preventive measures to this disease, specifically if the cause is lack of intrinsic factor. However, it can be lessened through early detection, a shift to healthy lifestyle, and treatment.

Doctors and medical researchers are always looking for ways to effectively manage this disease. A new study shows that methods such as serum cobalamin measurement and measurement of hematocrits speed up the process of diagnosing pernicious anemia. Other connected disorders which lead to pernicious anemia include megaloblastic anemia or the appearance of abnormal white blood cells and decreased levels of platelets and acquired aplastic anemia which is a complete shutdown of the functions of the bone marrow.

Pernicious anemia arises from common symptoms mentioned earlier, so it’s required for adults who are aged 60 and above or those people with a family history of pernicious anemia to seek medical checkups regularly. It’s always good to investigate common ailments like stomachache and changes in skin, hair, and nails, as these are warning signs of major diseases.

More from FindATopDoc on Pernicious anemia

How to lessen a child's fear of the dentist?

How can you prevent cataracts from getting worse?

Can migraine headaches be cured by physiotherapy?

What are the signs of early stage gum disease?

Can acupuncture cause miscarriage in early pregnancy?

Can I lower my eye pressure?