The Causative Agent of Jock Itch is a Fungus

Jock Itch is a fungal infection that affects both men and women, usually in the groin and genital area. The infective agents are fungal organisms of the dermatophyte group. They are more commonly identified as Trichophyton rubrum and Epidermophyton floccosum. The kind of skin infection these organisms cause is called Dermatophytosis.

The spores of these fungal organisms are transmitted through contact. The organisms commonly grow in the genital zone primarily because we touch and wash our genital area more often in the shower and in handling towels. Contact with contaminated persons and articles transmit spores directly to the groin. 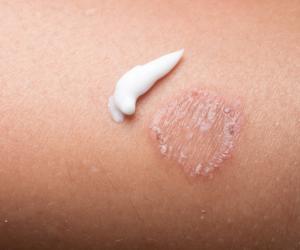 Dormant Spores Are Activated When Groin Conditions Are Ideal

A few fungal spores are normally always present on the surface of our skin. They remain on the outer surface and do not cause any harm until conditions for growth are optimal. In order for the fungus to thrive, it needs the support of three major influences:

Higher levels of blood sugar - such as in diabetic patients - has a direct connection to the growth of fungal and yeast microbes on the skin. Confronted with high glucose levels, the body tries to eliminate excess glucose through urine - necessitating frequent trips to the urinal. If the body doesn’t replenish lost water, it becomes dehydrated. The skin dries up, creating an itchy sensation. These are ideal situations for opportunistic microbes like fungi and candida to infect the outer layer of skin.

Obesity also sensitizes people to skin infections. A higher body mass creates innumerable skin folds where skin rubs against skin. This creates abundant crevices that are ideal for fungal infections to grow. The folds in the groin increase the surface area exposed to fungal attack. Obesity also slows down movement fosters lethargy, thereby reducing the urge to maintain personal hygiene, which is yet another opportunity for fungi to grow

Diseases like leukemia, brain cancer, diabetes, and Down’s syndrome can impair the immune system, exposing the body to fungal and yeast infections regularly. When the immune system is weakened, spores of candida and fungi probe the cutaneous layer and infect deeper tissues through open sores.

Jock Itch: The Facts You Should Know

Can women get jock itch?

What medication helps with jock itch?

Jock Itch: The Facts You Should Know

Signs and Symptoms of Jock Itch